skip to main | skip to sidebar

So I finally bit the bullet and bought myself a new laptop. I spent a 'little bit' more than my budget was, but in the words of Rachel in friends "Look how pretty!" I love my new baby. Her name is Nicole. I don't suppose for one second you care why I called her Nicole, but I'm going to tell you anyway. You may remember that the In-laws old laptop was called Rex. Well he was called Rex because he was a dinosaur, well, Rex died a slow death. So I went and bought the beautiful laptop. Rex was also a housemate on the UK Big Brother, and they brought his girlfriend into the house, she was a feisty little thing. And so the laptop is now called Nicole. I bet you're so pleased you came to my blog tonight aren't you?

Oh and I also got some of that mobile broadbandy stuff. You know, the one where you plug the dongle thingybob into the laptop and bob's your uncle? I got it. I feel quite posh now!

Ok, so I've had a bit of a spending spree and now I have a new toy, and freedom to do whatever I damn well please! YEY me.
Posted by Helen at 7:27 pm No comments:

Well, we've moved house now, we are now living in Scotland, a beautiful little village called South Queensferry, the beach is only a 10 minute walk away, and other beaches and places of interest are only a short drive away, it's so pretty here.

The down side is that we're staying with family right now. 8 people in a three bedroomed house, and all three kids in our bedroom, there's not a lot of space. Add to that the annoying kid we're living with. My niece in law's son. GAH! To say he's spoilt is an understatement. This kid gets EVERYTHING he wants, whatever it is, he'll get it. That is NOT how I have raised my kids, but unfortunately they are picking up some of his behaviour. We're trying to put it right but he's a little ****.

We're waiting for a house, it could still be a while, but we'll get one eventually, the sooner the better in my book.

We've been here just over 2 months now, and have no regrets about moving at all. I wish we'd had a bit more time, but apart from that it's all good up here.
Posted by Helen at 11:56 am No comments:

One minute, I have this teeny tiny baby, smaller than a dolly, hooked up on wires, and not even fitting properly into preemie clothes/nappies. The next, fast forward 5 months and he is above average for his weight/height! He was 5 months yesterday, and weighs 17lb 3 oz now. The ped says we can start trying him on cereal, so we did.. He loved it!! Even opened his mouth up as the food headed towards him! How can this be? My tiny baby is not so tiny and growing up!
Posted by Helen at 12:22 pm No comments:

So I wake up at 5.30am this morning in a sweat. Thank God that dream's over. I'm sitting in a coffee house, not dissimilar to the one in friends. I'm talking to my ex best friend, we lost touch years ago, but in the dream we'd obviously stayed in touch. She was involved in some kind of gang, which is weird cos she's not the tough girl kind. Talking to her, it seems like she stumbled upon it but can't get out. The gang consists of 3-4 young guys. I can't make out if she's dating one of them or not, but she seems close to one of them. suddenly she seems scared, she's telling me she wants out, and I'm telling her she can do it but that I can't help, she has to do it herself (I don't know why I said that, because it's not like me to leave a friend in the lurch) and she suddenly starts crying. I give her a hug, and when I pull away, she's Kimi! A tiny toddler with tears in her eyes, who's scared. I cuddle Kimi and tell her everything will be ok, and that I'll look after her. Then I turn away, and look back and it's the ex friend again. I stand up and tell her I have to leave, then she whispers something to me, which I don't remember as she leaves, I call after her "Oh no, don't get me involved in your gang stuff, I'm not going there" And I walk to the other side of the coffee house to sit down and drink my coffee.

Next thing I know one of the gang members comes round, he says "you're paralysed aren't you?" I say "No" and he suddenly gets a huge knife out and tries to slash at my legs, I grab the knife handle and manage to steer it away from my legs, but I am screaming for the manager to come help, but no sound is coming out.

All of a sudden I am in my old army appartment in germany, but with my DH and not my ex. He is at work at I am cleaning the house when I hear noises outside, I look through the tiniest gap in the curtains, which are closed, and it's the gang. They see me because they are staring right at the window. I quickly move away, and look at the clock to see of DH is due home yet. I realise that it's getting late and there's no sign of him. I grab my cell phone but before I have time to dial, the house phone rings. I answer and all I hear is heavy breathing. I ask who it is, and what they want, but I get nothing. I slam the phone down and try to call DH from my cell. But his phone number has been deleted from my contacts.

Skip forward a few hours and I am back in the house I live in today, and I am sitting in the kitchen eating dinner with DH, the kids are asleep, and I am telling him about the gang. He says I need to go to Scotland right now with the kids, and that he'll follow after the house business is sorted. Suddenly I am back at the coffee house again, and I am looking for my friend, I tell her that she had better not tell anyone where I am moving to.

When I get back to my house, I am packing my stuff into a small case when the door starts hammering, I don't know who it is, as there's no glass or peephole (there is on my real door, but not this one) but I'm guessing it's the gang, the knocking gets louder and louder, and I'm hiding behind my wall unit, just waiting for the door to bust in, and then I wake up! 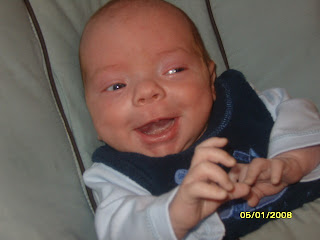 Well, James is getting big now, he came home from SCBU when he was 5 weeks old in the beginning of december, and has been going from strength to strength. He hasn't had any major issues, so I know we've been incredibly lucky with him. He's now 11 weeks old and weighs over 9lb. 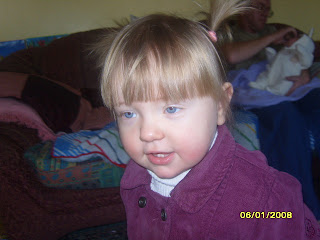 JJ is now full steam ahead, walking, running, climbing... EVERYTHING!! Her hair is getting longer, enough for pigtails, and I cut her a fringe because it was driving me nuts when she had her cold that snots would get in her hair.

Ahh and finally Kimi, ever the princess. Her sentences are getting longer and longer, and she is getting increasingly annoying as she grows up! Adorable as she is, she is quite the bully to her little sister, I have to watch her every single second.
Thankfully both girls absolutely adore their brother and very rarely get rough with him, they love to kiss and cuddle him, which is nice.
Posted by Helen at 12:41 am No comments: 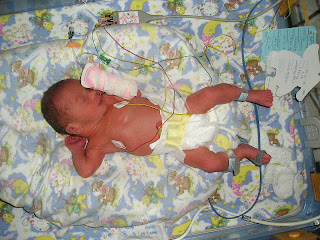 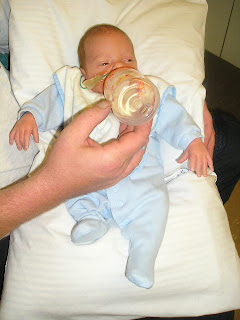 Well... We made it to 32w 6d before James decided he wanted to come on out and meet his sisters. My waters continued to drain, and I ended up with an infection which obviously triggered pre-term labour. It started in the early hours of 26th october (almost 4 weeks after my waters originally broke) and by 6am the ctx were getting stronger, so I called Dh and had him come home from work, and called my mum to watch the girls. We got to the hospital around 11am and they stuck a CTG monitor on me to measure my ctx. By 2pm the consultant came to see me and said that we needed to get baby out. Because he was breech, it had to be a section, which I was totally fine about, and James Alan arrived at 4.19pm weighing 4lb 1oz.

He's now a month old and doing great, he's still in SCBU (like NICU) but is doing well, he's off all monitors and has never needed oxygen. He is doing well with his bottles, but sometimes needs to finish with an NGT. He weighs 5lb 15oz and has 67mls every 4 hours.

Well things have gone a bit mad here. At the end of september (The day after JJ's 1st birthday) I got rushed into hospital as I couldn't breathe, and my chest was really wheezy. At first the dr's thought it was a suspected clot on the lung, but that came back clear, then they thought it was pneumonia, but that came back clear as well. So they finally said it was a bad chest infection, with the possiblity of pregnancy induced asthma. Just what I needed. So after a short stay in hospital with nebs etc.. I came home with an inhaler and antibiotics.

Then the following Monday (1st Oct) My waters went, and I was only 29 weeks. So I had to go back to hospital, where it was confirmed that my waters had indeed gone. I had steroid injections to help mature his lungs if he needed to come out, but thankfully I never went into labor. So after a few days they sent me home on antibitoics and I have to go back into hospital every couple days to have a monitor put on, and have bloods drawn to test for infection. I also have u/s every week to check how he's doing and to check my AFI levels, but right now it could all still happen at any time. We're hoping to make it to 36 weeks and then the dr will either induce or schedule a section as the risk of infection from a prolonged rupture goes up after that. At the moment it will likely be a section because he's breech and doesn't have a lot of fluid to turn himself round, but I guess anything could happen. So we are just taking things day by day right now, I am on bedrest probably for the rest of the pregnancy.
Posted by Helen at 10:52 pm No comments:

How many people have visited today?

I suffered from a rare debilitating form of morning sickness during both of my pregnancies, called Hyperemesis Gravidarum (HG). The HG set in very quickly both times and lasted until the baby was born each time, with constant nausea and vomiting throughout. Take a moment to visit the HelpHER link I added below (Hyperemesis Education and Research) for more information or to educate yourself or others.

Helen
I am 30 yrs old, live with my fiance, 2 daughters and 2 blue eyed siberian huskies.